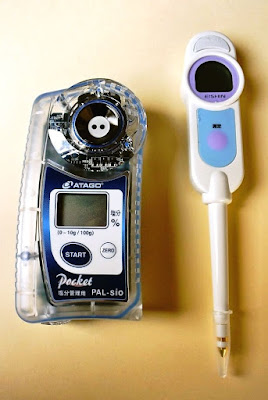 Here are some very useful tools for a reduced-sodium diet. Aside from measuring spoons and cups and a scale, enbunkei (塩分計) salt meters to check sodium content of food become extremely handy and necessary to come up with best estimates of how much sodium is going into your body. A number of Japanese dishes are accompanied by broth that is not necessarily consumed, so knowing the sodium content of ingredients is often not enough, and measuring what is consumed (or what is left behind) really helps.

Some salt meters are as simple as indicating low, appropriate and high ranges in color codes, and some also give a percentage. I have one in a thick pen shape by Eishin (right) and one by Atago (left) that looks like a fat compact remote control. The Eishin model gives sodium level to one decimal place, whereas the Atago model gives it to two decimal places. Both models (and most salt meters sold in Japan, I suppose) display sodium content as a table-salt converted level. For example, when a salt meter shows 0.9%, an item with a weight of 85 g (approx. 3 oz) contains 301 mg sodium (0.9 [%] x 85 [g] / 100 x 1000 / 2.54).

Among compact salt meters (10,000 yen or US$100 or less in Japan), higher-priced models are naturally more precise, and can also check salt level of solids or items with thick consistency, such as pickles, by dicing/pureeing and diluting them. I bought my Eishin model for around 6,000 yen and Atago model for 10,000 yen from Japan.

The salt level of human body fluid is said to be 0.85% (0.9%), much like normal saline solution, and it is supposed to be the level where people in general start to find food tasty (for saltiness). In my understanding, people’s sense of taste is acquired through experience, and those who have become accustomed to eating food containing higher sodium are likely to find food with a salt level under 0.9% not tasty. By the same token, people can train themselves to adjust their sense of taste and gradually shift their preferred salt level range downward.