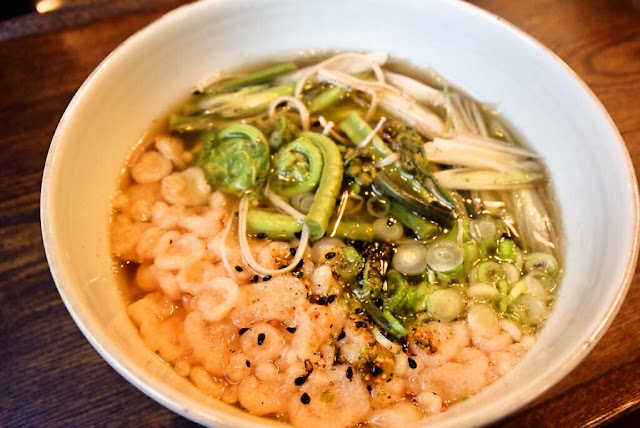 As a noodle topping, sansai mountain vegetables alone give a refreshing taste but could be a bit too light. Tenkasu tempura pearls add a rich note but could lack texture. They soak up the soup, which could also mean you get more sodium than desired. Combining these two ingredients while reducing the volume of each is one delicious solution. Sliced young myoga stems offer a clean aroma and taste.

For the recipe below, usukuchi pale soy sauce and regular dark soy sauce, not reduced-sodium soy sauce, are used for the soup to achieve stronger umami. Dried enoki mushrooms are also added to enhance the umami effect. The strong soup means more satisfaction with a smaller amount compared to a weaker soup, and this naturally makes us refrain from taking extra sips, preventing excess sodium consumption. This works especially well with unflavored toppings or toppings that contain lots of moisture.

2.
Bring plenty of water to boil (for cooking soba noodles).

Put meshida and warabi, and simmer for 1 minute.

When water vigorously boils, put soba noodles, and cook according to package instructions.

When done, transfer to cold water (save cooking hot water), chill, and gently rub surface with hands, changing water until it becomes clear.

When ready to assemble, drain soba, and pour hot water to warm up noodles, and serve in individual bowls.

Put meshida, warabi and enoki (including soup) as well as tenkasu tempura pearls.