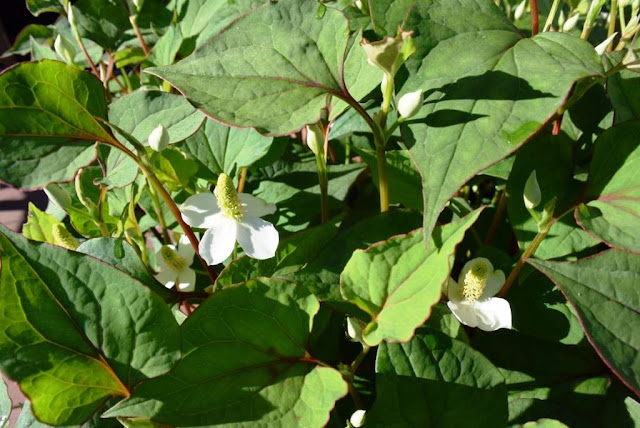 In the US, a tricolor variegated form called chameleon plant is commonly available for ornamental use (often marketed as a ground cover). When we say dokudami, it usually refers to the original form with green leaves, which are sometimes edged with dark red.

The Japanese name dokudami comes from an old expression that means to control/suppress poison, reflecting the plant’s long history of remedy use despite the fact it is largely regarded as a weed that grows in shady sites with moist soil. As its alias juuyaku [lit. ten medicines] suggests, the plant is regarded as a useful home remedy for many purposes, including detoxification and cleansing wounds of infection as well as treating acne, eczema, burns, insect bites, bee stings, and so on. While the entire plant is considered effective, leaves, stems and flowers are often dried to make a tea or more concentrated decoction for routine consumption. The tea works as a diuretic.

To make dokudamicha tea, put dried leaves, stems or flowers and water in a pot, and simmer as long as you wish. We normally use a small handful of dried dokudami for two cups of tea, and simmer for 15 minutes to 1 hour, or up to several hours on the woodstove — it’s really up to you. Some people put more dried dokudami to make a strong decoction-type tea. Others simply pour boiling water over dried dokudami and steep just like making regular tea. For us, simmering a long time seems to result in a milder taste and smell. It could smell a bit fishy (as the plant’s English name suggests) when simmered only for a short time.

In late spring or early summer (June -July for us in the Pacific Northwest), the plant starts to bloom. Its white flowers are pretty adorable (as in photo at top). If you have access to dokudami growing in an unpolluted environment, try harvesting the flowers.

Dried dokudami flowers (photo above) make a nice tea with a somewhat reddish hue (compared to brown tea when made with dried leaves or stems) that tastes like an English tea. Having no trace of fishy scent is a big advantage as well.

The tea (made with any part of the plant) tastes good cold, too.

To treat insect bites or bee stings, rub fresh leaves between your fingers to get the juice, and apply it over the affected area. Repeat application of the juice as necessary. The juice does smell fishy, but if you can stand the smell, the juice relatively quickly reduces itchiness.

For burns or to cleanse infection (pus), make a paste with the leaves by wrapping a stack of several in foil and cooking on low heat for a few minutes. Cooked leaves become like paste when mixed. Apply the paste on the affected area, and cover with a bandage if needed. The paste has less smell, as the smell is strongest when leaves are fresh.

Some people mix the juice, paste or pureed leaves with Vaseline to make a first-aid ointment.

Besides usage as a home remedy, dokudami is used as a sansai mountain/wild vegetable in some regions. I have not yet tried it myself, but cooking with oil is supposed to eliminate the smell, and tempura is the standard method in Japan. A kinpira spicy saute of stems or roots is said to be good.

Dokudami‘s growing habit is very invasive even in native areas. If you decide to have a dokudami plant in your backyard or on the deck, planting it in a large container is recommended. Do not discard unwanted plants on the ground when dividing or re-potting, otherwise you might end up using chemicals to kill spreading dokudami in your garden. Just one starter plant from a friend filled a wine barrel tub in two years for me, and I expect the plant will start to come out from the bottom holes in the near future.