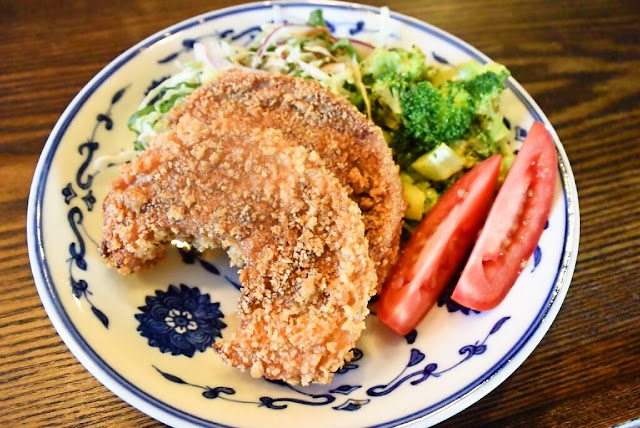 Tasty, filling yet light cutlets made with gluten cakes. Compared to more commonly known tonkatsu pork cutlets, this dish is much lower in calories and gentler on your stomach. Gluten cakes are first flavored with dashi stock, shoyukoji soy sauce rice malt and vinegar to get a meaty taste, followed by usual preparation of cutlets, but in a leaner way (below). No shoyukoji available? Balsamic vinegar does a great job in that case.

Place kurumafu in a container (small frying pan in photo), pour dashi, and rehydrate until soft (30+ minutes to overnight).

When kurumafu is soft enough, tear or cut each cake in half.
Gently squeeze out dashi (into frying pan), and set aside.

Add shoyukoji and kurozu to dashi, and bring to boil.

Put kurumafu, and simmer until liquid is gone, 5+ minutes on medium low heat.

Flip once or twice for even flavoring, and cook until little liquid comes out when pressing kurumafu.

When done, remove from heat.

Have coating ingredients ready in separate bowls or trays.
For egg, break egg white apart, instead of whipping or beating.

Heat oil in small to medium pan.
Oil depth of 5-6 mm should be enough.

Coat each kurumafu with flour, shake off excess, dip in egg, and coat with coarse okara soybean pulp.

When oil is hot enough (about the same temperature as for other deep-fried dishes; if smoke appears, that’s too hot), gently put coated kurumafu.

Flip when one side is golden.

Hold each piece in standing position so that sides also become golden (optional; recommended for sake of final appearance).

When done, transfer to paper-lined tray to eliminate excess oil.

Plate, and pour over sauce.
Ready to eat!