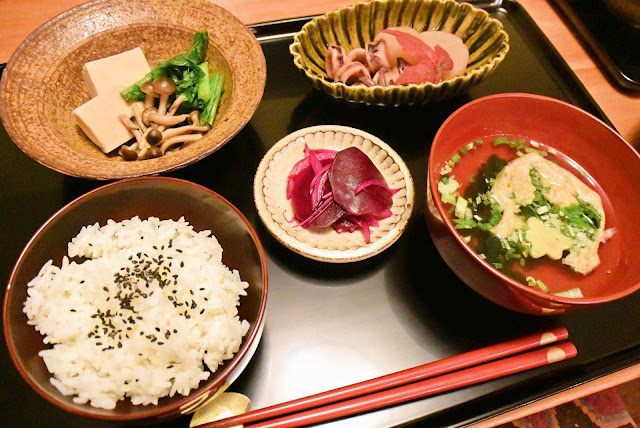 Last month, I took the opportunity of an unexpected opening in my work schedule to visit my parents. My parents are in their late 70s and early 80s and have some health issues, and I wanted to see how they are managing their everyday routines. Recently, conversations over the phone often have some blank spots or do not really make sense, requiring some effort and imagination to figure out the real story. Seeing them in person was the fastest way to understand the situation.

My mom was diagnosed with heart disease early this year, and her recent test results were not very favorable. We read a detailed report on her tests together at the kitchen table, and she realized it was not a joke. She is supposed to be somewhat familiar with a reduced-sodium diet due to a long-standing kidney problem, but this is basically her first time to seriously try to cut back on sodium intake. She tried shiokoji salted rice malt as a replacement for salt (and partial sweetener), and found the results acceptable with a dish prepared using a super-low sodium product I secretly substituted in her dashi container. She also liked the dishes I made using brown rice vinegar as a partial soy sauce replacement. Better still, my father did not seem to mind the taste of modified recipes.

Upon returning from Japan, I wanted to make a nimono broth-simmered dish, one of my mom’s standard dishes. Nimono is something where I’ve found it hard to adjust the sodium level without compromising taste. If I can figure out a method, my mom would have another dish she can eat with peace of mind.

Some tweaks with seasonings added some zip to the daikon and calamari nimono. I used brown rice vinegar and shoyukoji as partial replacements for soy sauce, miso and sugar. As there is no shoyukoji in my parent’s kitchen, I will try this again without using it next time.

Tender koyadofu no fukumeni could be boring, so it is paired with shimeji and mustard greens. Shimeji, known for its flavor, works as an instant boost in a number of dishes, and this was no exception. We both liked the combination with mustard greens, particularly with the crispy stems. Variations in texture within one dish are always a plus. If serving this to my father, who is having trouble chewing recently, I would chop the greens into smaller sections and simmer them a bit longer for more tender results, or prep-boil them for tenderness without dulling the green color.

Osuimono clear soup is something I prefer to have when there is a dish flavored with miso. Beet and red onion pickles are just a small addition to the table, offering color, texture and a change of pace between other dishes.

My feet and ankles were totally swollen by the time I was leaving Japan this time. I wore a pair of compression socks on the return flight to the US to mitigate the swelling. I guess it was from the fatigue of traveling around on little sleep before and during my trip, but probably mainly from eating out a lot while in Japan, which naturally makes it harder to control sodium intake.
My enlarged feet and ankles returned to their original size a few days after going back to our normal diet at home.

My parents were surprised to hear that I eat the same things Tom does, and worried that I might have some serious condition. They still regard it as a special diet. Maybe so, but what we do is nothing special and is actually recommended for all healthy adults by WHO and a number of organizations in different countries. Just as you would modify the menu for someone who has a cold, it is something you can manage in your own kitchen. No big deal. It does take some time to get used to the method, but that’s OK, since it takes a little time to let your taste buds adjust.