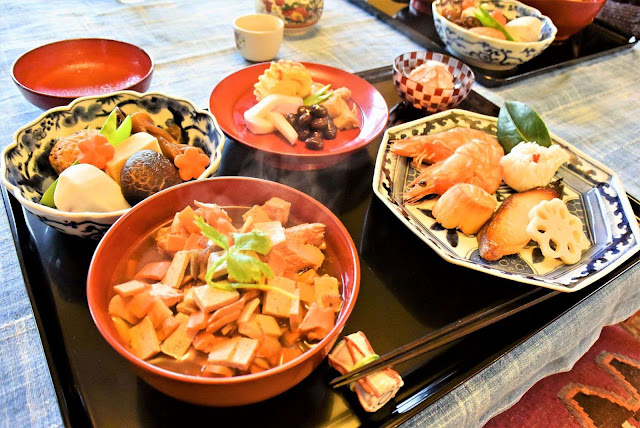 Once again this year, a smallish, basic lineup of osechi perfect for a breakfast for two.

Finding good fish is always a challenge in our town despite its location on the seacoast. Yet this year it was a case where a series of problems can lead to an amazing solution. Earlier in December following several days of power outage, we made grilled kasuzuke salmon out of defrosted salted salmon fillets, and it struck me that the taste of the fish, which was a bit dry due to my mistakenly grilling it slightly too long, would probably go really well in ozoni soup. Tom agreed that the taste would be a great match, and we bought a fillet of sockeye salmon for the ozoni. As it was previously frozen, I salted the fillet to extract excess moisture from the flesh and marinated it in sakekasu sake lees for two nights while preparing our ozoni to the semi-final flavoring stage. On December 30th, grilled kasuzuke salmon was added to the soup, which was simmered to blend the flavors, chilled overnight, and simmered again with the last flavor adjustment on the 31st. And after all that, we were rewarded with one of our most successful ozoni ever on the January 1st.

Another dish, kuromame no fukumeni black soybeans, reached a point where their texture was nearly perfect yet tasted bland due to too much water. I moved the liquid into a small pot and reduced it to two-thirds, then put it back in the bean pot. By the next day, kuromame tasted soft yet fully flavored. It is a nice trick.

Tateyama sake is named after the Tateyama Renpo mountain range in Toyama. It is the standard choice for lots of locals in the prefecture. There is nothing pretentious about it, and the sake has a clear and clean taste. As a dumb kid, I had long thought a liquor store also named Tateyama in my hometown was the maker of the sake, and I wondered why the store’s son, my classmate, never talked about sake making. The sake Tateyama is made in Tonami City toward the west end of the prefecture and it likely has nothing to do with the liquor store in the eastern half, other than the fact that the liquor store sells lots of bottles of Tateyama.

In the afternoon, we had neighborhood friends over for another round of osechi. Since eating exactly the same food is not fun, satoimo no fukumeni was replaced with satoimo no miso-ni and kamaboko fishcake was cut in a different form, while kuri no kanroni candied chestnuts and sekihan steamed sweet rice with azuki beans were added for a celebratory occasion, along with mineoka-dofu (milk kuzu pudding), horenso no gomaae (spinach in sesame dressing), moyashi to shungiku, sumookusaamon no ohitashi (mung bean sprouts, garland chrysanthemum and smoked salmon in light broth), koyadofu no ageni (deep-fried dried tofu in broth), hikozuri (bamboo shoots sauteed with miso and ground sesame seeds) as well as yuzu daifuku rice cakes for dessert.

While I simply follow custom, I recently learned that the idea of a feast in Japan is to have various side dishes, all in a small portion, including dishes that do not routinely appear at the table. The meal on New Year’s Day indeed exemplifies this idea, which was explained in the last book I read in 2018 (Naomichi Ishige, “Nihon no Shokubunkashi“). The book provides many clear explanations and observations on food history. It goes back as far as the Stone Age as it traces the background of the food we eat today. A highly recommended read for those interested in the topic. (Basically the same content is available in French: “L’art culinaire au Japon”; there also is an out-of-print English version titled “The History and Culture of Japanese Food.” Ishige made special mention in his Japanese edition that the English version was incomplete, as it was published without his knowledge or his final review.)